CBC News – After 60+ Years, Woman Discovers She Doesn’t Have Citizenship

This article (including video & image) was originally posted by Michelle Ghoussoub of CBC News on December 16th, 2017. Click here to read the full article. 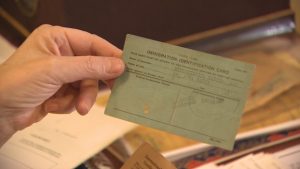 Irene Gyselinck arrived in Canada as a refugee from Germany on Aug. 25, 1951, with her mother and brother. She was just a one-year-old, and has never known any other home since.

But after more than 60 years in Canada, Gyselinck discovered she’s not actually Canadian.

Gyselinck, 67, grew up in Manitoba and now lives in Deep Cove, B.C. Over the course of her life, she has worked as a welder, car detailer, and artist, among other things. She also married, had two children and was widowed.

She always had a social insurance number, health insurance, and paid her taxes.

The realization that she’s not a Canadian citizen has sent her life into a tailspin, leaving her unable to  acquire valid identification and at risk of losing her health insurance.

Immigration lawyer Richard Kurland said cases like Gyselinck’s are not as uncommon as they might seem — especially in cases from decades ago. Immigrant parents might not have applied for citizenship for their children because they didn’t understand the process, or couldn’t afford the associated costs…”