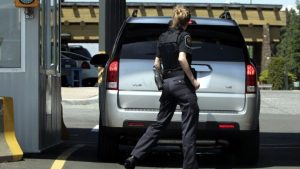 An apparent U.S. Customs and Border Patrol internal memo adds credence to the recent numerous complaints from Iranian-born Canadian and American citizens that they were questioned and held for hours at the Canada-U.S. border in Blaine, Wash.

Despite reports that up to 200 travellers of Iranian descent were detained at the Blaine Peace Arch crossing on Jan. 4-5, U.S. Customs Border Protection (CBP) has denied such allegations. It told CBC News that delays at that popular border crossing — between B.C. and Washington state — were due to staffing issues during a busy holiday weekend.

According to the memo, the target list included people between the ages of 20 and 58 with various links to Iran and Lebanon, such as being born in one of the countries or having travelled there. Lebanon has close ties with Iran.

Blaine-based immigration lawyer Len Saunders provided CBC News with the memo. He said it arrived in a blank envelope at his office on Wednesday from an anonymous source.

Saunders believes he was sent the memo because he has been outspoken about the alleged treatment of Iranian-born travellers at the border, calling it unconstitutional.

“Somebody with an interest in what happened had enough courage to come to my office and drop off the smoking gun,” he said.

A former CBP officer who worked in the Seattle Field Office viewed the memo and told CBC News it appears legitimate. CBP declined to comment on its validity, but never declared it a fake.

To read the rest of the article click here.