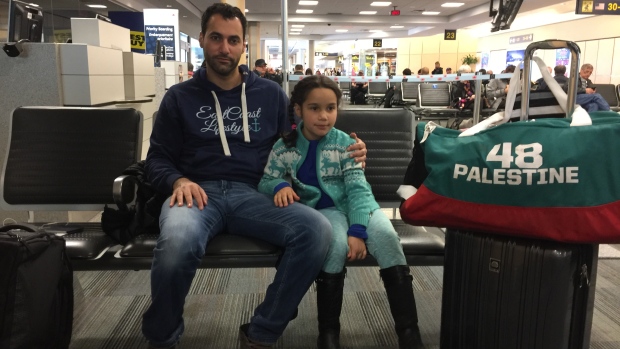 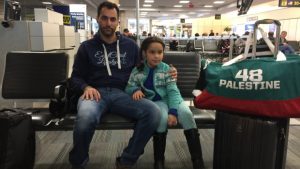 Ahmad Hussein and his six-year-old daughter Mariam, who was not allowed to fly on Air Canada because her father had signed her passport. (Ahmad Hussein )

A Halifax man wants airlines to warn families that parents are not allowed to sign the passports of their young children, after his vacation plans were stalled when his six-year-old daughter wasn’t allowed on a plane.

On Wednesday night, Air Canada refused to let Ahmad Hussein’s daughter Mariam fly from Halifax to Washington, D.C., because he had signed her Canadian passport. Hussein said he’d been told to do so by an American customs official during a previous trip.

If airlines are beginning to enforce a government of Canada rule that parents cannot sign the passports of their children, then they need to warn passengers, he said.

“They need to change their policy as opposed to hurting others at no financial loss to them,” said Hussein, a Halifax dentist.

“They should be vigilant in informing the public about their new way of approaching this issue. I’m sure this has never been an issue in the past because I’ve never heard of this before.”

In Canada it is illegal for a parent or guardian to sign a child’s passport. Doing so makes it invalid, according to the Department of Immigration, Refugees, and Citizenship.

If a child does not sign their own passport that section must be left blank, the department said in an email.

Hussein knew that but was forced to sign Mariam’s passport four years ago on a trip to the United States.

“I was instructed to do so by U.S. Customs when we were travelling to New York, telling me that they won’t allow her in the country until I filled out the passport information,” he said.

Since then, Hussein and Mariam have travelled to the United States, the United Kingdom and the Middle East several times. They just returned from another trip to the U.S. 2½ weeks ago and had no problems with her signed passport — until Wednesday night when they tried to board a plane in Halifax.

Air Canada told Hussein his daughter was not allowed to fly. That put a hold on the holiday, costing the family money and vacation time.

Airline has to obey regulations

A spokesperson for Air Canada said in an email that the company cannot allow a passenger to travel with an invalid passport.

“While passengers might understandably want to blame the airline, it is important to note that all airlines have no choice but to apply government regulations,” said Isabelle Arthur.

“The Canadian government makes no exceptions regarding destination or honest mistakes, and we cannot let anyone travel with an invalid document or we will be fined. Passengers can also be denied entry in the country of destination.”

On Thursday morning, Hussein headed to the passport office in Halifax and got a new travel document for his daughter. He expected to fly out by evening.

He also has a plan to deal with overzealous customs officials in the United States.

“From now on I’m actually going to carry in my daughter’s passport the actual statement from the government of Canada indicating you cannot sign a minor’s passport on their behalf.”