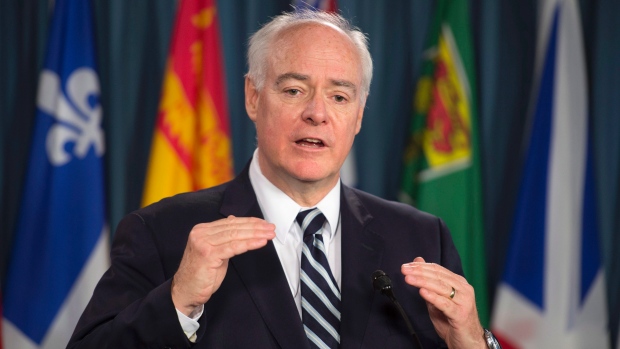 Immigration reforms made it difficult for businesses to attract high-skilled workers, chamber of commerce says

Perrin Beatty, the president and CEO of the Canadian Chamber of Commerce, says he is calling on the federal government to address key issues with Express Entry that are affecting the ability of businesses to hire high-skilled workers ‘before conditions worsen.’ (Adrian Wyld/CANADIAN PRESS)

Canada risks losing its competitive edge because of immigration reforms brought in under the previous Conservative government for political expediency, says a new report by the Canadian Chamber of Commerce.

The report is critical of the Express Entry immigration system launched one year ago and reforms to the Temporary Foreign Worker Program made in June 2014 following a series of stories published by CBC’s Go Public team alleging abuse of the program.

The chamber calls on the federal government to conduct an immediate review before things get worse.

Express Entry was launched in 2015 to attract what the Conservative government called “the best and brightest” highly-skilled workers from around the world in an effort to meet the country’s labour needs. But employers looking for software engineers, family physicians or university academics got lumped in the same category as workers with less specialized skills.

“In an atmosphere of hyper-political reaction over temporary foreign workers, the government made policy choices that ultimately sacrificed the effectiveness of Express Entry,” the report says of changes brought in by the business-friendly Conservatives.

In a phone interview with CBC News, Perrin Beatty, president and CEO of the chamber, said “It was a political response to a political problem, but with significant economic consequences for Canadian businesses.”

Canada appears to have attracted “fewer” high skilled foreign workers since June 2014 when the Conservatives announced the last set of reforms to the Temporary Foreign Worker Program, raising serious concerns for the chamber, which represents some 200,000 businesses across the country.

‘For the Canadian chamber and its members who employ highly skilled international talent, the situation has become untenable and dismaying.’– An immigration report by the Canadian Chamber of Commerce

“For the Canadian chamber and its members who employ highly skilled international talent, the situation has become untenable and dismaying,” the report says.

“Policy approaches that were born of suspicion, negativity and reprisal were applied to the Temporary Foreign Worker Program and then similarly and inappropriately applied to Express Entry.

“For all the good work of government officials, the programs are falling short of their goals and creating inefficiencies within departments,” the report said.

“The concept of attracting ‘the best and the brightest’ is missing in action,” says the new report, “as the competitive model of Express Entry is currently undermined by the protectionist policy embodied in the labour market impact assessment tool.”

Under Canada’s new immigration system, highly-skilled foreign workers not only have to line up a job before applying to come to Canada but their job offer has to be backed by what the government calls a positive LMIA. That assessment is a document all employers now need to hire a foreign worker over a Canadian one.

The chamber calls the introduction of this new requirement a “misstep” that has made it “extremely challenging” for businesses to attract highly-skilled workers such as video game developers, top-flight researchers and workers in the trades.

“As a result, Canada appears to have invited far fewer highly skilled workers to work here on a temporary basis,” the chamber said pointing to a 45 per cent drop in LMIA’s, which are required for work permits in the year, since June 2014 when the temporary worker reforms were brought in.

The 32-page report titled “Immigration for a Competitive Canada: Why Highly Skilled International Talent Is at Risk” lays out what Canadian businesses see as “missteps” with the immigration changes and offers 20 recommendations.

“Canada risks losing its economic and competitive advantage when it comes to attracting highly skilled international talent, says the chamber. “Fortunately, there are simple and efficient ways to mitigate and avoid that risk and undo the damaging impacts.”

Beatty is calling on the federal government “to act before conditions worsen.”

“Now is the time for a sober, thoughtful review of what Canada can accomplish through economic immigration,” the chamber report said.

A spokeswoman in the office of Immigration Minister John McCallum said he was not available for comment today.