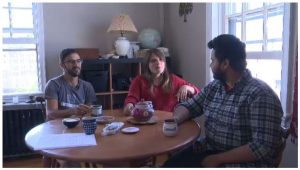 Adi Das Gupta has been in Canada for nearly eight years. Now he is facing deportation back to India.

Gupta came to Canada as an international student to study at the University of Waterloo.

Once he graduated, he stayed in the country on a post-grad visa but he says now that has expired.

The problem, Gupta says, is that he doesn’t meet immigration requirements because of his work experience. Immigration authorities are looking for paid employment, while Gupta has mainly been working on not-for-profit projects, something he’s very passionate about.

“I’ve met so many great people. I have gotten involved in initiatives. The bike share project that I got involved with gave me a lot of grounding in the community,” he says. He’s one of the founders of Community Access Bike Share in Kitchener and he’s also worked with the Co-Op Community Kitchen, a group that provides affordable food.

Gupta says because he doesn’t have a full year of full-time paid work, it’s not enough.

Kitchener immigration lawyer Jennifer Roggemann says international students make good candidates, but not enough credit is given for their work experience.“They don’t really recognize Canadian work experience as much as they should,” says Roggemann. “You work one year at a qualified job in Canada you get 40 points. If you work five years you get 80 points out of 1,200 and I don’t think that’s fair.”

Even though his family is in India, Gupta says he loves Canada and considers it home. “Canadians do have a very solid reputation of just being really down to earth, good people,” says Gupta. Gupta says he wants the community projects he’s been working on to succeed, so over the next two weeks, he is handing his responsibilities off to others.

His friends have started a petition and plan on meeting with their member of parliament on Friday in hopes their friend will be allowed to stay.

Read the full article here and watch the video below