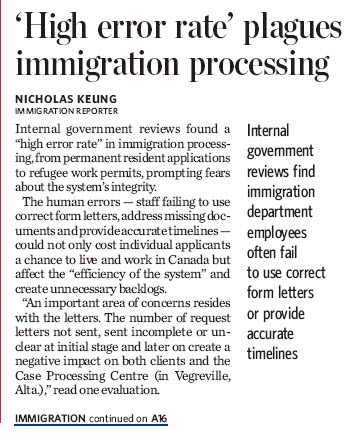 The following two news items appeared in the Toronto Star and Metro News and Canadian Press and deserved at least a reposting here.

The human errors — staff failing to use correct form letters, address missing documents and provide accurate timelines — could not only cost individual applicants a chance to live and work in Canada but affect the “efficiency of the system” and create unnecessary backlogs.

“An important area of concerns resides with the letters. The number of request letters not sent, sent incomplete or unclear at initial stage and later on create a negative impact on both clients and the Case Processing Centre (in Vegreville, Alta.),” read one evaluation.

It was one of three internal reports obtained by the Star under an access to information request.

“It delays the processing, causes more waiting times for clients and increases the work for staff. It also increases the amount of whitemail received at (Vegreville) when clients reply to unnecessary requests or seek clarification. The number of same request letters sent over time also creates unfairness for clients whose applications got refused after one request.”

Immigration applicants have complained about inconsistencies and a lack of fairness in the application processing — and sometimes the decision-making — by Citizenship and Immigration Canada (CIC) officials.

The three so-called “quality management” reviews give the public a rare glimpse into the extent of these official errors, which authorities have never admitted to.

The rank and file of the immigration department blames the errors on the rising number of “casual employees” hired to replace welltrained permanent staff.

“Since the Harper government came into power, Citizenship and Immigration has seen too many cuts and lost many qualified employees,” said Steve McCuaig, national president of the Canada Employment and Immigration Union. “You have casual employees brought in within a short time with little training while qualified people are shown the door,” he said.

According to the union, casual employees make up half the workforce responsible for reviewing permanent residence applications. These employees, mostly students, are trained for three days on the department’s case management system. But Immigration department spokeswoman Sonia Lesage insisted the system’s integrity was not compromised and officials regularly carry out quality monitoring.

“As a result, the department is able to improve programs and provide faster and better services. CIC is focused on making our application processes and our correspondence with clients simpler and clearer,” she wrote in an email.

“We have moved to a system of ensuring perfected applications are handed in at the beginning of the process.”

However, the union’s McCuaig said the casual employees are not up to the task and some of the mistakes “are not fixable,” leaving applicants’ lives in limbo.

According to the review of 996 files handled between Nov. 1 and Dec. 6, 2014, at Vegreville, which deals with permanent residence applications, the quality management team found these shortcomings in the 617 request letters sent:

Of 426 files that got a second review in the five weeks, decisions were pending for149 owing to errors made by staff at an earlier stage. Another review — of refugee permit applications — found 113 errors in 88 files.

Toronto resident Bashar Kassir said he was not surprised by the many errors identified within the immigration system. His sponsorship for his parents in war-torn Syria was denied in August because officials said he failed to respond to letters the family claimed it never received.

“When mistakes are made, they need to recognize it and have recourse to address them,” said Bassir, whose file was finally reopened after his story appeared in the Star in October. “They should not force people to go to endless appeals for their mistakes.”

His parents received their permanent resident visas in December — over three years after Bassir submitted his sponsorship application.

The human errors — failing to use correct form letters, address missing documents and provide accurate timelines, among others — not only could cost individual applicants a chance to live and work in Canada, but also affect the “efficiency of the system,” creating unnecessary backlogs.

“An important area of concern resides with the letters. The number of request letters not sent, sent incomplete or unclear at initial stage and later on create a negative impact on both clients and the Case Processing Centre in Vegreville, Alta.,” said the evaluation of the Alberta centre’s operation, one of three internal reports obtained under an access to information request.

According to a Centre review of 996 files from Nov. 1 to Dec. 6, 2014, of 617 requests 13 per cent did not address missing items, 23 per cent did not define consequences for not meeting reply deadlines, while six were “not professional” or the incorrect template was used.